Visitors flock to the Outer Banks to swim in the surf, lie in the sand and soak up the sun on hundreds of miles of barrier island beaches. But those aren’t the only reasons to plan a vacation here. After you towel off and put on shoes, see more of the Outer Banks by searching for wild horses, walking through history at one of the region’s two national seashores, climbing the tallest dune on the East Coast and visiting the Crystal Coast. 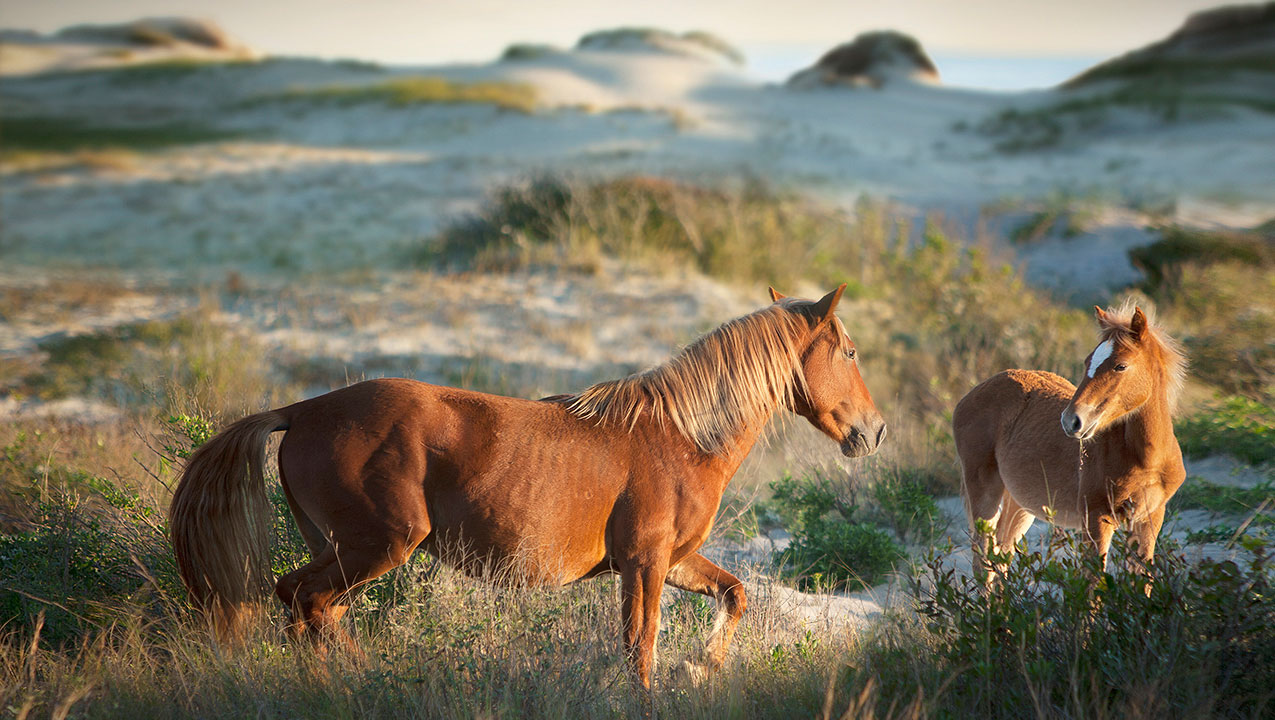 N.C. 12 turns from blacktop to sand in Corolla. From that point north it’s the territory of four-wheel-drive vehicles and wild horses. Historians believe Spanish explorers first brought horses to the Outer Banks in the 1500s, a story that’s shared at the Corolla Wild Horse Museum. They’re magnificent and somewhat elusive wild animals. You can see them in three spots on the North Carolina coast. You’ll need to catch a ferry in Morehead City on the Crystal Coast to see the almost 250 Shackleford Banks ponies. But you’ll better your chance of coming across some by taking a guided tour on the beaches of Corolla or visiting the Ocracoke ponies, which graze in National Park Service corals. Remember, the horses are wild animals, so always maintain a distance of at least 50 feet. 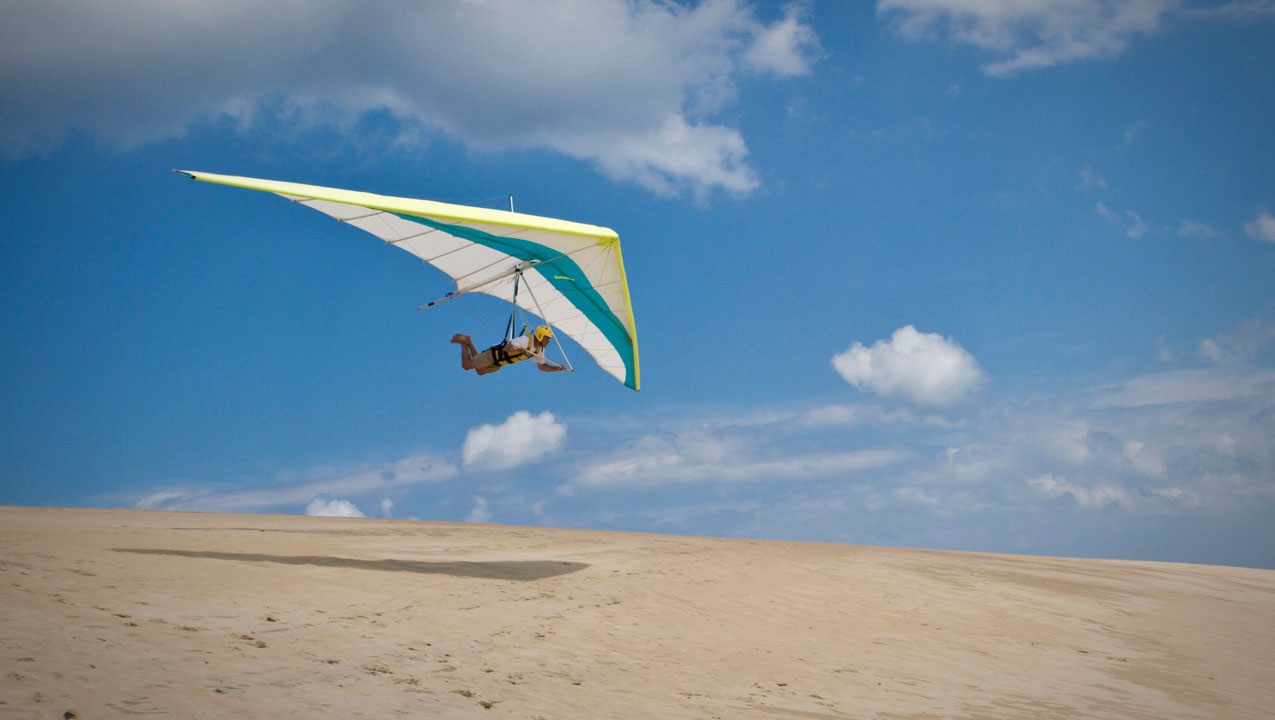 Its height varies from 80 to 100 feet, depending on the wind, but Jockey’s Ridge is always the East Coast’s tallest sand dune. Access it through the similarly named state park, where exhibits and rangers share stories of the local wildlife. You’ll hike to its summit, but your descent has options: hiking, kite boarding, sand boarding and hang gliding. The last requires a guide from Kitty Hawk Kites. In June the dune hosts the Rogallo Kite Festival, which honors the NASA scientist whose work led to hang gliders and stunt kites. Try flying and making kites, or just watch experts fly ones up to 100 feet long, during the three-day event.

Cape Lookout National Seashore is 56 miles of beach on four barrier islands. Ferries and personal boats are the only way to reach this undeveloped portion of the Southern Outer Banks, where there are no paved roads, amenities are limited and shade is almost nonexistent. So to explore the history here, you’ll need appropriate clothing and plenty of water and snacks. Take the Ocracoke passenger ferry to Portsmouth Village and tour the buildings, including a lifesaving station, that remain at this once bustling port. Reach Cape Lookout Lighthouse, where you can climb 12 stories of narrow stairs to its top, via the ferry from Harkers Island. That’s where you’ll also find the Core Sound Waterfowl Museum and Heritage Center. Wander both its floors, where locally made waterfowl decoys and recordings of fishermen singing to synchronize their work help tell the story of Outer Banks residents. 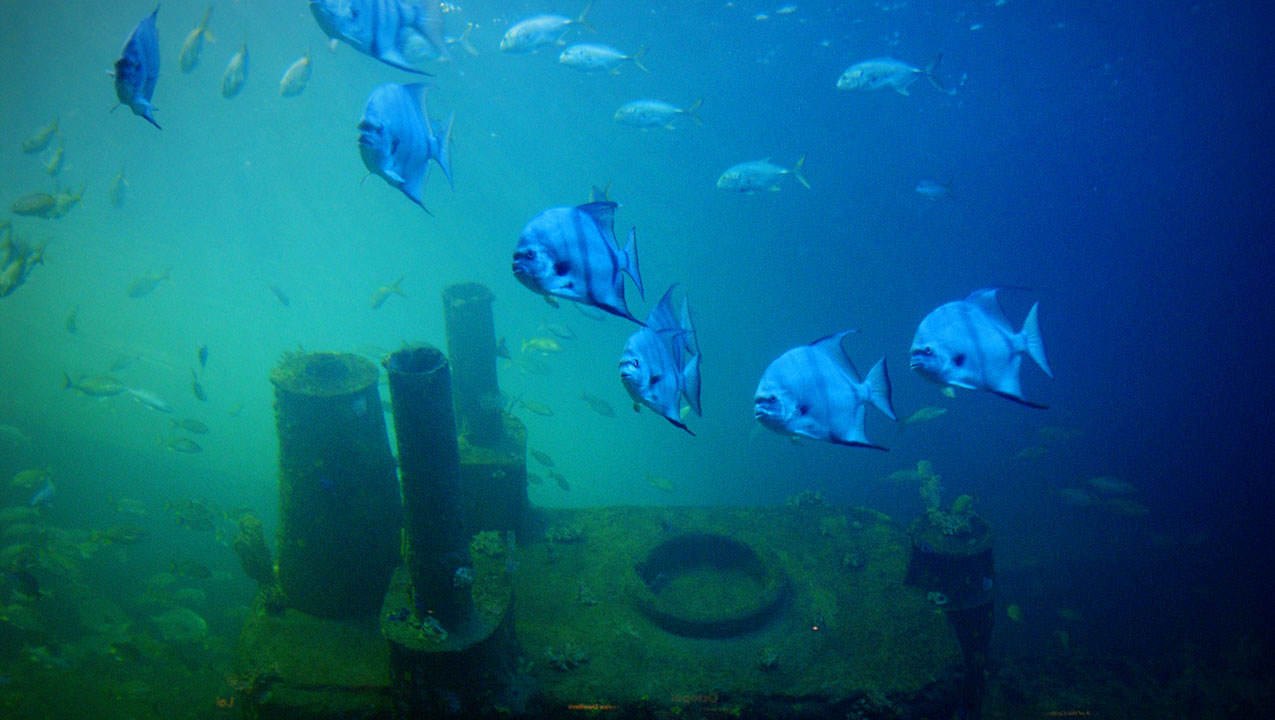 The Crystal Coast stretches from Cape Lookout to Swansboro. It’s a quiet section of the Southern Outer Banks, where families enjoy sandy beaches, meals at small restaurants and just enough shopping to score souvenirs. At its center is Pine Knoll Shores Aquarium. Its exhibits take you on an aquatic adventure from the mountains to the coast. You also can touch stingrays, watch sea turtles rehabilitate and see sharks have supper. If you want to catch a fish, head to the Bogue Inlet Pier. Drop your line in and listen to waves crash below while you wait for a flounder, bluefish or Spanish mackerel to bite. Tackle can be rented or purchased at the pier.